We are still loving the slow cooker! I know I have already said this … But, I love how it makes so much food, so you don’t have to cook for a couple of days.  This time we made Jambalaya. This is a recipe that would traditionally be eaten over rice. Hey, not much in my life is traditional, so why start now. We served it as a stew with a salad on the side. Oh, and I also left the shrimp out, I just wasn’t in the mood. 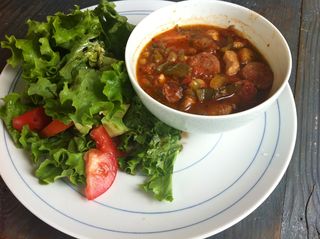 Directions
1. In a slow cooker, mix the chicken, sausage, tomatoes with juice, onion, peppers, celery, and broth. Season with oregano, parsley, Cajun seasoning, cayenne pepper, and thyme.
2. Cover, and cook 7 to 8 hours on Low. Stir in the shrimp during the last 30 minutes of cook time.

This makes about 10 servings. So, we ate jambalaya for about 3 days straight! I have to admit, it did get a little old after a couple of days, but it still beat cooking!